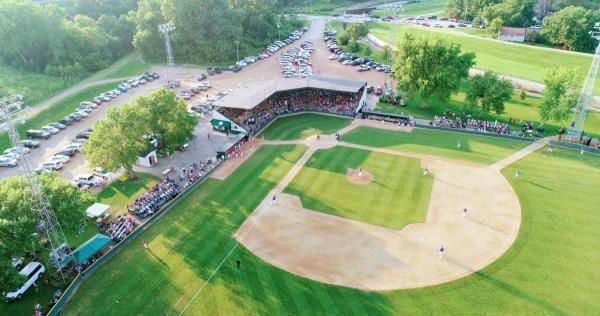 Chris Ohm remembers the day he, along with representatives from Chaska and Waconia, presented a bid to host a future Minnesota State Amateur Baseball Tournament.

“We’re sitting in the room with the Geislingers from Watkins, the Glencoe/Brownton guys. (Chris) Reuvers is there with Faribault and co-host Dundas. We’re having burgers and you just look around and you’re in awe. Here you have some of the best baseball communities in the state,” Ohm said.

He remembers the camaraderie the group had. All groups bidding for the same state tournaments.

“Nobody was against each other in that room. There was this genuine love for what each group brought to the table. Here I am, representing Waconia, and I’m in the room with Cold Spring and Watkins, Dundas, Chaska. These are some of the best baseball people,” Ohm said.

Faribault and Dundas with third site Milesville were awarded the 2022 state tournament.

The state tournament will be a showcase of Waconia’s Lions Field. A $1.4 million grandstand project opened in 2017. Ohm, who has lived in Waconia for nearly 20 years, said the baseball field was something “you drove by” before. Now it’s a game-changer park.

“Waconia was this dormant giant. People here love baseball, but they never had any momentum. You go back 10 years ago and things started to come to light. There’s the Waconia Lakers (amateur team, Crow River Valley League), the Waconia Islanders (35-plus team) old timers. There’s the Legion team, which started playing against the Chanhassens, the Eden Prairies, of the world. When Waconia won a state championship in baseball, it really woke the community up,” Ohm said.

Led by Duane Sawyer, father of former Gopher pitcher Dalton Sawyer, Ohm said a group of six or seven enthusiasts worked behind the scenes to bring baseball to the forefront.

“We see this as a coming out party for Waconia. We feel like we’ve been doing it the right way and the reward is coming. Cities like Chaska, the working partnership we’ve had with them, we just want to be in the conversation with them,” Ohm said.

The Chaska Cubs are set to celebrate year No. 93 as an organization in 2021.

Athletic Park has seen some upgrades in the last year, including a new brick backstop and fencing in front of the dugouts. A new scoreboard and sound system were added in recent years as well.

“We’ve been asking for some things over the years. With the tourney coming, the city decided to make some tweaks and improve the look of the park. The new scoreboard is really a big highlight. Fans should be able to follow the game much easier now. The old one was burning out,” said Chaska Cubs Board member John Rekow in September.

Rekow, along with general manager Bob Roepke, have been meeting monthly with the WCH2021 Tournament Committee. Recent behind-the-scenes work has included securing an apparel company (individual pre-sale options delivered to a customer’s home will be a first), corporate sponsorship and program oversight.

The committee plans to unveil its website around the first of the 2021.

“We’re going to set the standard for behind the scenes work,” said Ohm, a principal at Breck School in Golden Valley.

What excites the WCH2021 committee is the potential for one of the largest crowds in 60 years. The 2020 tournament, despite attendance restrictions due to COVID and long drives for Class C to Springfield and Milroy, drew in the fifth-highest paid tickets in the last 20 years.

Waconia and Chaska, 12 miles apart, are an “easy 20-minute drive away” for many baseball hubs.

“We really want to create something special for the casual fan, and something for the diehard fan,” Rekow said.

Ohm figures people will be starved to get back to the State Amateur Baseball Tournament in 2021. And they’ll be ready.

“People are going to instantly fall in love. We’re not talking second date love, we’re talking first date love. Chaska, Waconia, Hamburg, we’re right in the heart of it all in terms of baseball. Now it comes down to execution,” Ohm said.

And execution is something the city of Chaska and Cubs understand. They have more than 300 Dugout Club members. Regular attendance for weekend games ranges between 500 and 1,000.

“We had people come down that said they have lived in Chaska for years and never took in a game,” Rekow said of the shortened 2020 season, in which admission was not charged. “They left wanting to come back next year for more. That’s what we are always striving for. Introducing Chaska Cubs baseball to our community for everyone to enjoy.”

Ohm grew up in North Dakota where town ball was just a story.

“There were six or seven teams that were really good that played each other. But we had no understanding of what town team baseball was like in Minnesota. American Legion baseball ruled North and South Dakota,” Ohm said.

After playing baseball at Concordia College in Moorhead, eventually moving to Waconia in 2002, he started reconnecting with many familiar faces from the Red River Valley area. Guys that continued their baseball careers in towns all across the map.

“You look at a city like Waconia, you can make a 25-mile radius, and you have a team in just about every major heart of town ball leagues across the state of Minnesota. We’re excited to show off what Waconia has to offer. We’re all in. We want to be the next baseball town,” Ohm said.